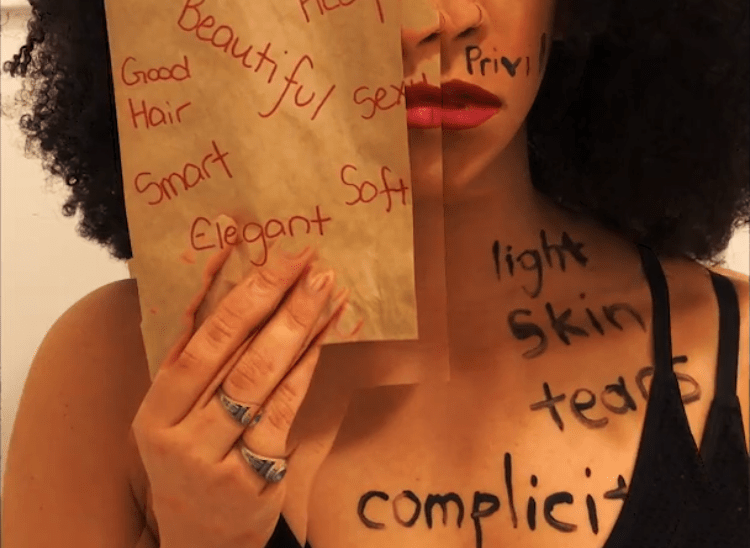 Colorism and the White Guilt in Light Skin Tears

“Light skins in particular can afford people palatability that people of darker complexions may not have as easily” — Bridget (Chicago, IL)

My school has reached out to me for the past two years to be featured in our Year in Review magazine. I’ve never responded. I’m lucky that my institution even asked for my permission to use my body because oftentimes people of color aren’t given that basic right. Quite frankly, I’m not the “face” of my school. This past year, I was the only Black undergrad in my music major. Sure, I’m comfortable and proud to speak up for my school. But I don’t want to be a still image, plastered with my toothy smile and my responses to questions I don’t wanna answer. My face can promote diversity for white people without promising resources for brown people. I think campaigns and advertisements should portray the desired future, but performative diversity without proactive inclusion is just contemporary servitude.

“Light skinned people: Do your homework, be conscious of the privilege you walk with, do what you can to fight the prejudice that our darker-skinned brothers and sisters (specifically dark skinned black womyn) face in every aspect of life, culture, politics etc” — Robert (Lawrenceville, GA)

Colorism [(n.) origin: slavery, like most fucked up things in America)

I know it’s not my job as a person of color to educate others about the history of our systematic oppression, but I just wanna make sure we’re all on the same page. Back in the day, lighter skinned slaves (who were typically the product of white slave owners raping Black slaves *cough cough Andrew Jackson*) were given indoor domestic work while darker slaves were assigned physical labor.  Light skinned slaves were placed higher on the skin tone totem pole due to their proximity to whiteness. White folks in power developed stereotypes to condone the hierarchy. Dark skinned slaves were “savages, criminals, and unintelligent” and therefore suited for hard labor while light skinned slaves did domestic labor because they were “smart and beautiful.”

“Media sometimes depicts darker skin tones as being bad or less than and [lighter skinned people] should help us change the narrative” — Joia (McDonough, GA)

Even though colorism originated from white supremacy, it’s perpetuated by us light skinned Black folks and other POC.  I say “us” not to imply an “us vs them” within the Black community, but to acknowledge where I stand on the color spectrum and own my privilege. For decades, elite HBCUs (Historically Black Colleges), societies, and Greek organizations used the Paper Bag Test to select new members and students. The Paper Bag Test pretty much means that if you’re lighter than a brown paper bag, then you’re in. If you’re darker, you’re out. And if you think the internalized colorism stops there, you’re sorely mistaken. Infamously, the casting call for the 2015 film, Straight Outta Compton, separated women from A-list to D-list based on skin tone and hair texture. A-list girls were “the hottest of the hottest” with “real hair – no extensions, very classy looking, great bodies.” On the other hand, D-list girls were “African American girls” that were “poor, not in good shape” and had “medium to dark skin tones.”

“If [light skins] actually want to be sensitive to this, you have to be able to check that privilege and realize that it does exist, so that when you’re in situations where it comes into play, you can be aware of it and actively work against it” — Tolu (Fort Washington, MD)

“When we point out differences in experiences and privilege, it’s not to minimize [light skinned] experiences, but to bring light to disparities we experience solely because of our skin” — Jasmin (Long Beach, CA)

What do the following things have in common?

They’re impossible. The same can be said for any “reverse _______ism.” That’s not to say that every light skin person has a perfect life (see my romantic history). Light skin folks can have difficulties in life, but they’re not because we’re light skinned. Light skinned tears don’t belong in the conversation of colorism because you can’t benefit from and be a victim of the same form of oppression. Oftentimes when light skin folks complain about colorism, they’re really talking about something else.

“Recognize when you see examples of the privilege and take a step back” — Fredrick (San Pedro, CA)

As a light skinned person, I present an externally palatable Blackness— one that’s been tamed and codified by white expectations. The white gaze views my Eurocentric features as “beautiful.” My proximity to whiteness makes people more comfortable. And these rationalizations (like white supremacy in general) are complete bullshit. Like, if I went to Disneyland and saw a cast member as light as me portraying Princess Tiana, I’d be pretty pissed. Any time I see a light skinned person being elevated, celebrated, or just damn listened to, I wonder who’s been marginalized simply for being darker skinned. I’m not saying to boo and hiss any light skinned person who makes historical progress. I’m just saying that it’s a foot in the door, not breaking down walls. It’s easier for us light skinned folks to succeed when white supremacy gives us a head start.

“[Light skins] don’t need to wait for it to hit close to home before they decide to take action or speak out for people when they are being discriminated against. Change definitely starts from them, their actions” — Oyinda (Chicago, IL)

It’s hard to talk about systems of oppression that we benefit from. To call the issues light skinned folks face “reverse colorism” feeds into white supremacy and negates the experiences of people who are actually victims of colorism. It further perpetuates that dark skinned folks are bullies and jealous of light skinned folks. And that’s just not true. I definitely don’t have all the answers. Anyone who says they have all the answers is an idiot or hasn’t lived enough to realize that they’re wrong. But I know that light skinned folks need to check our privilege from the jump. It’s using our proximity to whiteness to dismantle the system that elevates us. It’s refusing celebration for satisfying the white gaze. We should contribute with our personal experience with colorism only when explaining how we’ve benefited from or perpetuated it. I’m used to being the only Black person in white circles, and I know I have an easier time because people don’t always “see me as Black.” For me, that’s the most powerful light skinned privilege I’ve ever experienced, and it’s terrifying because all of these systems of oppression prime me to perpetuate white supremacy. When I’m the only Black person around, I feel like it’s my job to make space for folks darker than me. So when people try to pull the shit of “Oh you’re so white for a Black person” I clap back with “Nah, just you associate positive attributes with whiteness, and I’m gonna serve as a reminder of Black excellence.” Because, at the end of the day, getting ahead while leaving someone behind holds us all back.

“To those who were built with the code of respectability, power, and privilege in their genes; your success is a platform I must continue to climb the ladder towards. The wealth of other skins are only pigment deep” — Carl (Chicago, IL)

Have you experienced colorism? Do you benefit from light skinned privilege? Comment below!

Want to keep up with my adventures? Be sure to Follow Inside The Kandi Dish on WordPress.com!

One year later and we’re still waiting for our @bumble sponsorship 🐝 Happy Anniversary, Love @dooleyman8
If you’ve received messages like this or followed this account, THIS IS NOT ME. I haven’t been hacked, and I would never DM without correct comma usage 😒 Please report this account so I can get it taken down. Thanks ☺️
Let the quarter-life crisis commence! 🙃 #25
Thank you for being my Valentine and my lil spoon ☺️
Justice wasn’t served today.
I couldn’t smize because I was too busy thinking about @erykahbadu 😇
Tis the season🌻🌱
Start of Something New—ish 😸💜 #newjob
𝑮𝒐𝒍𝒅𝒆𝒏 𝑯𝒂𝒊𝒓. 𝑫𝒐𝒏’𝒕 𝑪𝒂𝒓𝒆. 👩🏽‍🦱✨